Moisture is one of the enemies of feet and a common factor in blister formation and a required one in maceration. Its also easy to come by and so was the basis for a sock stress test. The general idea was to keep my feet wet, and cover lots of distance (specifically while ‘shadowing’ a GORUCK Heavy event over 24+hrs)

In a previous post I did a quick comparison between the brand new sock company PROSOK that is US and veteran owned and the much more established DryMax (a product I’ve used for sometime now).

I’ve been testing PROSOK for day to day wear (super comfortable) and for GORUCK events, and have many friends that have used them for road running as well as OCR and trail races. Most people I know have claimed them to be the best sock they have ever used for both blister prevention and comfort.

I must say my initial tests for day to day wear and some short runs have proved very positive.

So on to the test itself. Before reading this, bear in mind that my specific findings and conclusions are based very specifically on rucking type events (such as a GORUCK Challenge, or Death Race) but will add my (untested) thoughts on application in other scenarios based on this specific test.

PROSOK is a relative newcomer to the world of technical socks. They are made using a bamboo micro-weave making them both environmentally friendly and breathable.

The main intended advantages over other products include

As a newcomer they only have one style of sock on the market at this time in a couple of different sizes. I tested the 16cm black/green sock on my left foot. Its just long enough to work with 8” military boots. 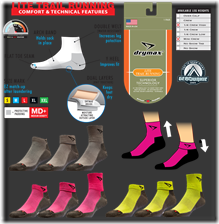 DryMax are a more mature company and as such have many styles of socks that are custom designed with features for specific applications, such as road or trail running, hiking, and even tennis or golf. They are manufactured in the USA.

The sock I used was the Lite Trail Hiking sock, in crew length – slightly longer than the PROSOK but still a good fit for military 8” boots.

Their main designed advantages are

I have been using these socks for sometime now and have sworn by them for most events I do.

The original intent was to perform the following test for the duration of a GORUCK Heavy event this last weekend but sadly an injury caused me to withdraw. Instead I decided to shadow the event to cover the same mileage with walking and running only, while carrying around 20-25lbs (camera equipment etc).

The specific parameters were

Between pulling the socks and boots onto the feet and lacing the boots, I added about 1oz of water to each foot. The intent here is to accelerate the stress test. Once of the enemies of foot care is moisture.

At any opportunity to walk through a stream, brook or puddle I took it. The C4T boot though needs to be submersed by a few inches to really let in water, and they also vent water quickly while walking.

The following observations were noted

Between 4 and 12 hours I continued to put on miles, which became noticeable. The temperature was beginning to warm up as daylight hit and the day progressed. Again I took every opportunity to stand in puddles or streams, or walk through them to rewet the feet from time to time. Once moving after soaking the feet, the venting action of the C4T boots was excellent which certainly helped prolong the onset of problems.

No issues occurred either in this time but again I noticed that the PROSOK foot consistently felt ‘softer’ and slightly more cushioned than the DryMax foot, but also often felt significantly damper.

At the 12 hour mark I did a foot check, photos below. As you can see for having 20-25 miles on mostly hard surfaces, with regularly soaked feet, both feet are relatively unscathed. 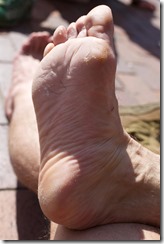 On replacing the boots I opened the tongue of the boots and poured in about 2oz of water into each before lacing up and getting ready to move on.

The 12-18 hour period is when I usually expect issues to start creeping in for me under less than ideal circumstances. Keeping my feet moist was definitely less than ideal. At around the 15 hour mark I was starting to notice hot spots and pain in two spots on the foot wearing PROSOK – the pinky toe and the outside edge on the bottom of my heal. It wasn’t painful but definitely hot spots that I knew were starting to turn.

The distance was also starting to take its toll on my legs too. Around 30+ miles in was causing some stiffness to start appearing in my calves and achilles tendon which was undoubtedly changing my gait in a subtle manner. 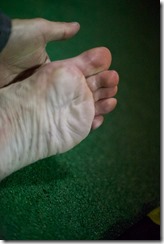 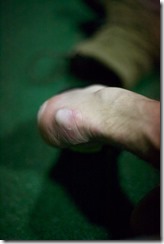 At the foot check I decided to drain the two small blisters using a sterile lancing needle, and apply a new PROSOK. I kept the original DryMax on the other foot.

The last 6 hours involved a slower pace, which puts less stress in the feet in terms of friction and shearing from movement. The draining of my blisters and application of a new PROSOK helped tremendously. The PROSOK in fact very quickly dried out the base of that foot almost reversing any tendency towards maceration.

Both socks performed better than expected given the conditions and are both worth trying – I consider these products both as head and shoulders above their competition. That said, in this one test the DryMax definitely had the edge, going for 24 hrs and 40+ miles without needing to be changed or wrung out. This was also a single test, and different conditions might provide different results.

The application of a new PROSOK was key to reversing the effects of the blisters and the softening of my feet while wet. The PROSOK also generally felt a little bit more comfortable most of the time, with slightly less noticeable hot spots and a little more cushion. The fit was also a bit better. I would, though, recommend spare pairs for wet and or long distance usage. Given that this is their first product, I am very impressed and can only expect future generations of product from them to get better as they fine tune their design.

The DryMax socks remain my favorite sock, despite the fact that the fit isn’t as easy to get right and the fact that they aren’t quite as comfortable. The fact that seconds after soaking my foot in a pond and then walking in a vented boot has them feeling bone dry is a huge deal and gives me one less thing to feel worried about during a GORUCK event, Death Race, or similar style event. I also like that I can choose a product tailored to the specific application although sometimes the choice can be confusing or overwhelming too.

I also have no doubt that BOTH socks would have been rated Excellent had I also used Trail Toes cream on my feet beforehand and reapplied every 6-8 hours. A side note – I did use Trail Toes in my butt crack and inner thigh as its a WAY better anti-chafe product than Body Glide and also smells a lot better too.

The first two pictures below show the blistering from PROSOK use. The second show some heel abrasion from DryMax use but no blistering. 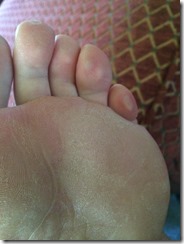 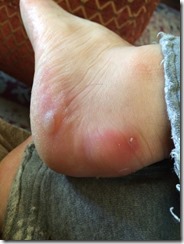 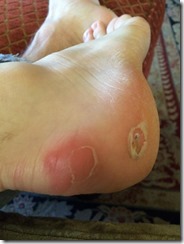 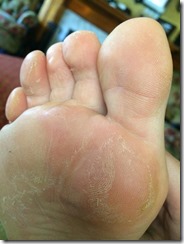 A quick note regarding the Super Feet Green inserts. This are usually my first choice, but they were a little too firm for long distances and in the future I might switch to their software version the Super Feet Orange.

PROSOK and DryMax are both worth a look. Check them out and add a comment with your thoughts.  Both of these have a place in my activity “toolkit”.

If I weren’t expecting to go for more than 10 hrs or have constantly wet feet (so a multi-day hike) then PROSOK would be my product of choice. Similarly for a short mud-run (I consider short anything up to 6-8 hrs) the comfort and fit of this product gives them the edge.

For longer applications where I might not get opportunities to change out socks (GORUCK Heavy or Selection, for example) I would combine Trail Toes foot cream with the DryMax Hiking socks.

Once again the specific products tested were

Note above I have used affiliate links to some of the products mentioned so that I can offset the costs associated with running the blog, but assure you that my recommendations would not be any different otherwise.

Some of the links to Amazon can be shipped for free with Amazon Prime. You can try Prime for free for 30 days.