The topic of motivation and inspiration have come up a lot in the last 18 months. It’s about 11 months since I walked again and about 8 months since a ran again, and in that time I’ve achieved a lot. My running pace is almost back to previous levels, my intensity in the gym has remained, my energy levels remain high, and I continue to practice yoga.

After a setback like I had, how was I able to get and/or stay motivated? I wasn’t. Motivation was less a factor than stubbornness and habit.

I have come to learn that the motivation to do something is irrelevant, and transient at best. What I have learned, instead, is that results and achievement come from something much deeper. That place seems way less exciting, way more mundane, but its really where the magic happens. That place is persistence and consistency.

But doesn’t that persistence start with being motivated? Perhaps, but usually not. In many aspects of life we get scared by the big goals, by the huge changes, and that fear can paralyze us from making any headway. Motivation also tends to be a way of being, and not necessarily goal oriented.
And yet more often the act of getting started, and being regular in our efforts gets us to a much bigger goal than we could ever anticipate and weirdly the beginning of effort is what often leads to motivation rather than the other way around.

We are what we repeatedly do. Excellence, therefore, is not an act but a habit

So while we constantly aspire to the greatness that others achieve, and look to them for our motivation, the right thing to do is rather to create the habit, be consistent and improve upon it over time. 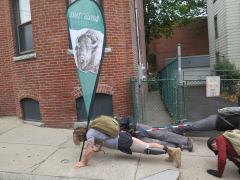 Easier said than done, right? Perhaps that is true also. A phrase I have heard from GORUCK cadre is “Get comfortable being uncomfortable”. In context, this means don’t let the discomforts of pain, cold, or exhaustion, distract you from your team and your mission. But it has wider connotations than that too.

Reveling in the mundane, in the repetition, and in the process is key. There is nothing exciting about learning to enjoy the boredom of consistent effort, until one day the compound effect of effort over time has allowed you to excel at that thing.
Think of an example in your life, perhaps something you’ve had to endure or chosen to endure for at least a year or more. This might be a task at work, it might be a workout regime, or it might be consistency of parenting, it might be running regularly even though you hate it. I would wager that everyone has at least one thing that they have “worked on” for a considerable time because its just what they have to do. Once you have that in mind, think back to a year ago and how capable you were at that thing compared to now. I guarantee that if you haven’t reflected in it, you have a new revelation and all that time and effort seems that much more worthwhile now. 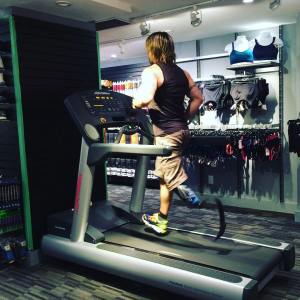 For me the last year has numerous examples. Just learning to walk on a prosthetic was something that was done among fear and trepidation. At first, the pain of walking was painful. With consistency and effort over time, and lots of “being comfortable with being uncomfortable” this turned into only hurting on uneven ground, and then only hurting when going downhill or downstairs, and then to being painfree but with an uneven gait, and all of a sudden – without targeting that bigger goal – my gait is regular and with pants on most people can’t tell most of the time that I am an amputee. This parallels into weightlifting, running, and everything else I’ve decided to continue to do even when its not fun.

So stop looking to be motivated and instead look to being persistently consistent.

Please also take a look at the follow-up article.

One thought on “Motivation Shmotivation”